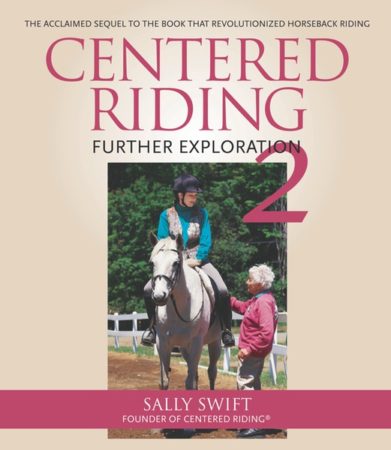 Centered Riding is not a style of riding as are dressage, hunter seat, or Western.  Rather, it is a way of reeducating a rider’s mind and body to achieve greater balance in order to better communicate with the horse.  Founder Sally Swift revolutionized riding by showing that good use of the human body makes a world of difference on horseback. Early in her work, she established what she calls the Four Basics: centering, breathing, soft eyes, and building blocks which, together with grounding, are the main tenets of her method.  When a rider learns and maintains these basics, then harmony between horse and human is possible.

Sally Swift’s first book, Centered Riding, made its revolutionary appearance in 1985 and continues as one of the best-selling horse books of all time.  This second book doesn’t replace the first one, it complements it.  In the intervening years, Centered Riding continued to evolve, and Sally inevitably developed many new concepts and fresh imagery, all of which are presented here.

About the Author
Sally Swift began her study of somatics at Mabel Todd’s Boston studio when she was diagnosed with scoliosis at the age of 8. Todd’s work helped her to remain active and thwart the progress of the lateral curvature to her spine. As a teenager, Sally practiced the body awareness she learned from Todd while horseback riding. Images from her posture lessons would come to mind as she rode. After graduating from college with a degree in agriculture Swift worked for the American Holstein Association for thirty years. When her back condition became very painful toward the end of her career, the study of Alexander technique helped her regain muscular strength and she began riding again. Images from her study of somatics came to mind as she rode. She realized that if her breathing was shallow and her body was tense, the horse became uncomfortable. When she aligned her body better and become more relaxed, the coordination of her horse also improved. In 1975, at the age of 62, Swift began to revolutionize the teaching of horseback riding. She put aside conventional training methods and focused on teaching body alignment and movement efficiency to bring forth the best performance of the rider and the horse. Sally died in April 2009 three weeks shy of her 96th birthday. The dedicated group of teachers she trained continue her teaching method.