You are here: Home / Education / Catalog / The Balancing of Forces in the Human Being:  Its Application to Postural Patterns

The Balancing of Forces in the Human Being:  Its Application to Postural Patterns 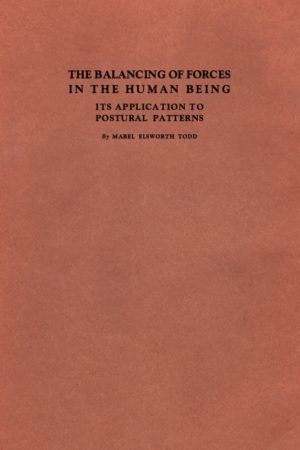 The Balancing of Forces in the Human Being was originally published in 1929 as a class syllabus for Mabel Todd’s physical education students at Columbia University.  It provided a description of the rationale and the goals of her method of posture teaching which she characterized as a “procedure for thinking,” rather than a system of remedial exercise.  In 2017, the monograph was digitized and republished as a Special Edition by the Thinking Body Institute.  Every effort was made to replicate the style of the original cover, typography and drawings.  Plates from the Spalteholz-Spanner Hand Atlas of Human Anatomy were scanned and enlarged for purposes of clarity.

About the Author
Mabel Elsworth Todd (1880-1956) developed a system of education called Natural Posture in the early 20th century to help students discover improved “postural patterns.”  Her approach was taught privately in Boston and New York as well as in the physical education departments of east coast colleges and universities.  In the 1930’s, Todd’s ideas began to capture the interest of performing artists.  Two of her  protégés, Barbara Clark and Lulu Sweigard, advanced the approach among dancers and actors from the 1950’s to the mid 1970’s; their students continued to develop the teaching in the postmodern era.  Currently the educational legacy created by Todd is best known by the title, “Ideokinesis.”