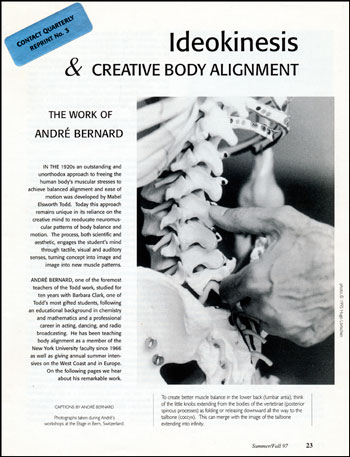 This is a reprint of an article that was originally published in 1997.  It features an introduction to Ideokinesis written by André Bernard and an interview, conducted by Richard Rosen and Nancy Lyons, in which Bernard discusses principles of the ideokinetic approach and offers insights into his teaching method.  The article is illustrated with black and white photographs.

About the Author
André Bernard (1924-2003) was a professional actor who appeared in numerous New York City theater and dance performances.  He also held a broad array of on-air positions with the National Public Radio Station (WNYC) in New York.  He became a student of Barbara Clark in the late 1940’s and together they devised pedagogy for teaching her interpretation of Mabel Todd’s material in group settings.  Through his adjunct faculty position at New York University and private studio and academic summer workshops in California, Germany and Switzerland, his teaching was a major influence on the evolution of post-modern dance education.